From marketing a brewery to a specialised app and now onto the hop boiler – that is the route that Steven De Backer, product manager of Avento Fearless Leader, has taken. “I have a professional background in marketing beer and, for the past few years, have been actively involved in the ongoing improvement of Avento Fearless Leader, the CRM package that is popular with many of the well-known breweries. So, I thought, let’s try it out in practice and make an excellent beer. After all, brewers will always tell you that their beer is different, better… So, I thought, why not brew a special beer of my own?” 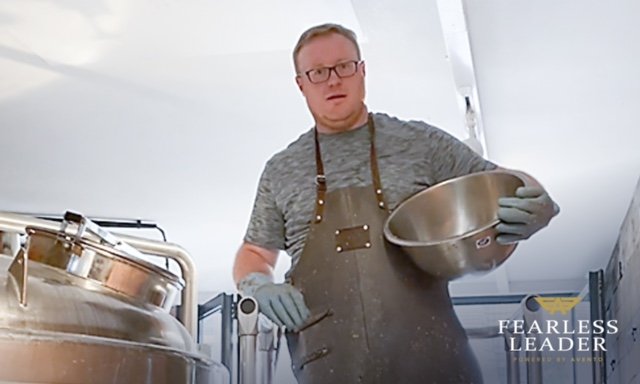 “It is calming, adventurous and exciting too”

Steven De Backer began his brewing adventure in 2019. “You start with a brewing syrup and then with brewing kits which contain all the various ingredients. It takes a bit of time to mash the malt, filter it to create the wort, add the hops and so on. It is a relaxing but, at the same time, adventurous and exciting process. When you bottle your brew after a week, you start to feel curious but you still have to wait 3 long weeks. You must always work hygienically too, in order to prevent any contamination. If your beer smells bad, you have to throw it all away.”

Is Steven patient enough? Has he been successful? Look out for the next chapter in his brewing adventure.

As a product manager for Avento Fearless Leader, Steven certainly has the patience to wait for his beer and is also daring enough to try something a bit more challenging. “I’ve stopped using the brewing kits with specific ingredients and started to experiment. I’ve read a great deal and also sought out brewing formulas for colour, clarity and taste. More or less water, hops and yeast… These create unique brews. There are hobby brewers who make 50 to 70 litres for themselves. I keep it to batches of 8 litres. I’ve had a few that worked well – and tasted good.”

Steven is certainly wiser as a result. Read all about his brewing adventure

As a home brewer, Steven has no competition. But with his beer, and his active brewing experience, he now views the offering differently. “I’ve always been a big beer lover and now I do my best to try everything. In the world of special beers, you see new variants almost every week. Sometimes, when I taste a new beer, I think: ‘Odd that this succeeded and has been put on the market’. Now that I know a bit about the brewing process, I know how to make improvements. But it could also be down to my own personal taste. I am a huge fan of strong, triple blonde beers.”

What turned out to be his best brew? You’ll find out in his next brewing adventure.

“Stepping into the market with market research and a recognisable image”

“I am in the youth association of KFC Molenzonen Hallaar football club in Heist-op-den-Berg. They play in green and red. Coronavirus meant that we couldn’t organise a party to celebrate our 80th anniversary, and we missed out on income as a result, so I came up with the idea of brewing our own club beer. So, a small group of us tested a few recipes. Ultimately we chose an amber-coloured beer and a blonde beer which is slightly cloudy. The blonde is a triple called Molenzonen Groen, with a green label. The red is called Molenzonen Rood and has had a little strawberry flavour added. Et voilà. They are on the menu in the canteen.”

Is it an easy process, brewing and marketing your own beer? Steven will explain next time.